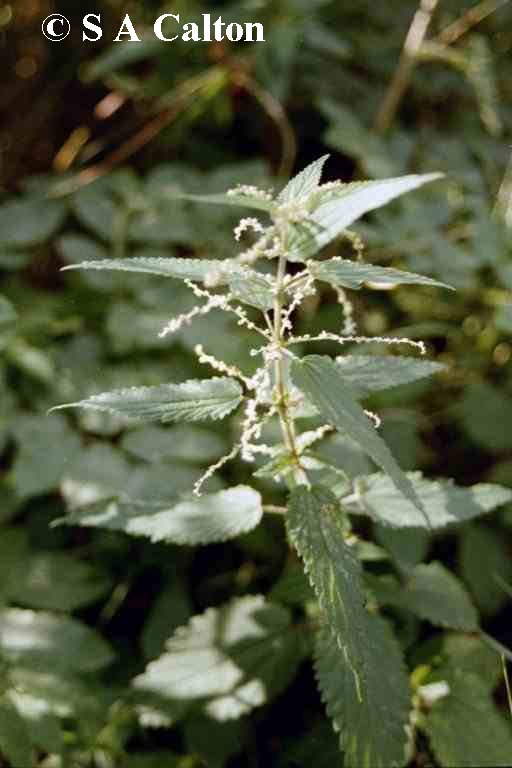 It would seem that the Common Stinging Nettle, Urtica dioica, is a relative newcomer to the Fens. Certainly, Babington's Wicken List of 1860 does not mention it. In 1908 Yapp called the common stinging nettle an ‘alien' to the Fens, a claim repeated by Godwin and Tansley in 1929.

The typical Wicken shade nettle was a tall narrow-leaved variant that, to a greater or lesser extent, lacked the stinging hairs of the main species. The difference between the common nettle and this non-stinging variant was not fully recognised until 1991, when a visiting Russian taxonomist, Dr Dimitri Geltman, declared the ‘Wicken' nettle indistinguishable from U. galeopsifolia as it occurs in Russia.

This was all unknown to me when I was photographing plants near the Wash Road at Welney in 2002. It was then that I noticed a particularly narrow-leaved nettle, which on closer examination had no stinging hairs at all on its leaves or stems.

It is well known that stinging nettle leaves vary in relative width – those growing in shade are broader than those in sunlight. However, the plant photographed was in quite an open position and still had leaves that fell well outside the range of the common nettle measured in a local study (private communication). And, of course, the plant was completely devoid of stinging hairs.

So, although the definitive test would be a genetic one ( U. galeopsifolia is tetraploid, whilst U. dioica is diploid), I think that this is good evidence that the Fen Nettle thrives in Welney