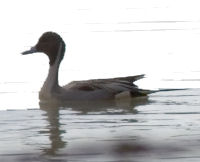 Females: 760 g. Sexually dimorphic in colour, and also slightly in size. This species is not seasonally dimorphic.

The Northern Pintail pairs monogamously, although males become highly
promiscuous during the breeding season. Favoured nesting areas are in
damp grasslands and agricultural fields, on sandy flats, or on lakes, marshes, or ponds. The female constructs the nest in a concealed location on the ground, using dry grass and leaves. Down is added when incubation begins. Six to nine olive eggs are laid, and are incubated by the female for 22 to 25 days. Once incubation has begun, the male deserts the female. The young are tended by the female until fledging, which occurs at 36 to 57 days of age.

The Northern Pintail's diet is 90% vegetation, and 10% animal matter in winter, switching to 55 to 75% animal matter during the breeding season. Typical foods taken include seeds and grain, and the leaves of aquatic plants. Animals eaten include aquatic insects, crustaceans, snails, and the occasional tadpole. Ducklings eat more animal than vegetable matter, because they need more protein for growth than do adults