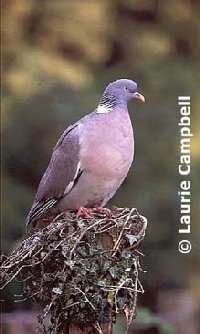 Type of pigeon, genus Columba palumbus, family Columbidae, orders Columbiformes. It receives one of its names from the white patches, which ring its neck. Immature birds do not have this ring. It is distributed throughout the Palaearctic region. Besides the white neck patches, it also has a white wing-bar.

The eggs are white, usually numbering two. Shells may be found on the ground where they are dropped, far from the nest, by the parent birds after hatching. Breeding seasons are long and nesting is timed to coincide with local abundance of food.

This bird (Britain's largest pigeon) used to be a woodland bird, but about 150 years ago they began to breed in hedgerows, villages and towns. Now it can be found throughout the land and farmers know no greater enemy.

Unlike many vegetarian birds woodpigeons aren't reliant on insect food for their young but provide them with crop milk instead. This allows them to extend their breeding season and increases the chance of successfully raising young. As ground feeders, they can be seen foraging in fields at any time of the day, but their feeding rate increases to a notable peak just before roosting. Frequently finding themselves on the wrong end of a farmer's gun has made these a generally wary bird.